The News Archive for Charles Finch

The News Archive for Charles Finch 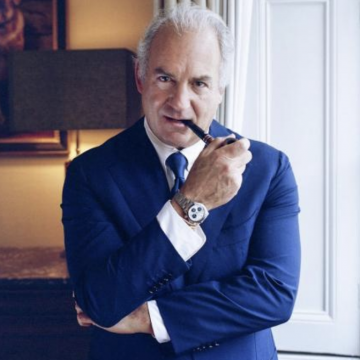 “This is quite the do,” said David Furnish, neatly summing up the goings-on at the 20th anniversary of Charles Finch’s annual pre-BAFTAdinner, cohosted by Chanel. For this edition, Finch took over the entire labyrinthine sprawl of private members club 5 Hertford Street...

DEAN & DELUCA, the world’s leading purveyor of fine food, enters the sports nutrition market with the launch of the DEAN & DELUCA Performance line. Charles Finch, DEAN & DELUCA Chairman states “DEAN & DELUCA has a proud history of innovation.  We believe strongly in the opportunity and vision of DEAN & DELUCA as a leading innovator in the sports world, due to the authority of the brand and the great potential for the brand in this growing category.”

At Work: Charles Finch’s Ode to Classics and a Stylish Outdoor Life

Charles Finch may wear many hats — Hollywood producer, worldwide chairman of Dean & DeLuca, entrepreneur and brand-builder — but he sticks, more or less, to a single uniform whether he’s in Los Angeles, Bangkok, New York or London.  The executive producer of the new Whitney Houston documentary “Whitney: Can I Be Me,” and an upcoming one on Cecil Beaton, Finch is also a founding shareholder of Chucs Dive & Mountain Shop in London, and head of the brand consultancy Finch & Partners.

London-based businessman Charles Finch is chairman of Dean & DeLuca and is also an investor. Finch will expand the food retailer to London in the near future by opening a store on the city’s Mount Street, near to The Connaught hotel and amid designer boutiques operated by the likes of Roland Mouret, Oscar de la Renta, Nicholas Kirkwood and Roksanda.