Founder/Owner of The Sporting Club 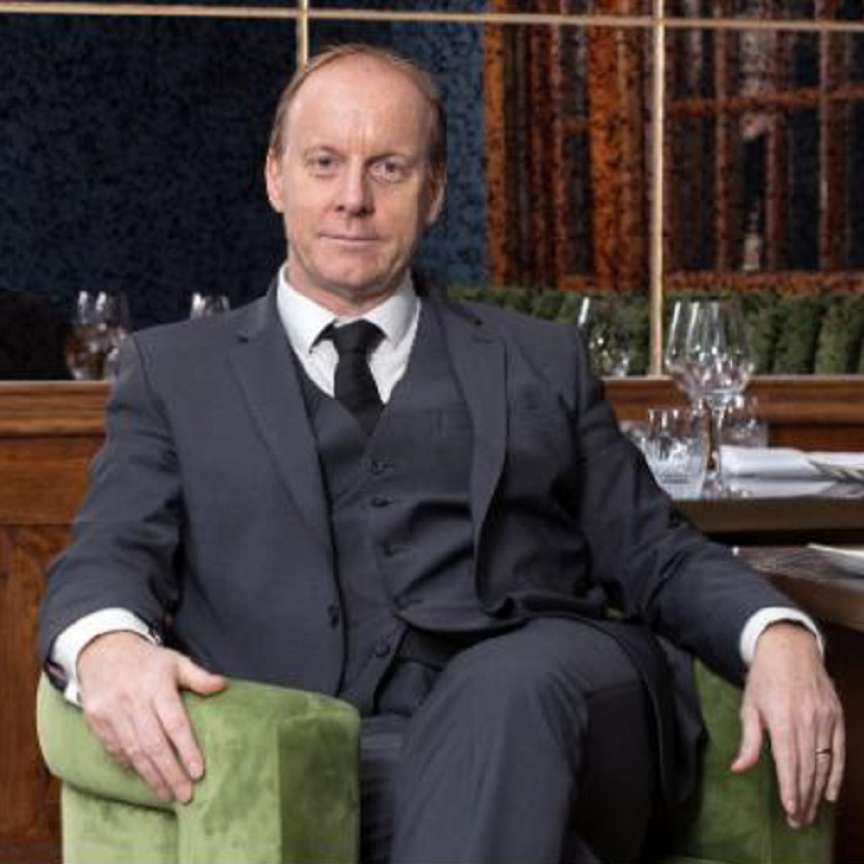 Ian Stafford is at the forefront of the British media and sporting scene, covering every global sporting event since 1988 and interviewing most of the world's top sports stars, for publications including The Times, The Independent, The Mail on Sunday, Sports Illustrated, Newsweek and more.
He penned the popular "The Player" series of participatory features for Esquire including a Chef for Gordon Ramsay, an Edinburgh Festival Stand Up Comedian, a Shaolin Monk, a Polar Explorer with David Hempleman-Adams, a DJ with Virgin Radio and more.

He has won Sports Interviewer, Sports Magazine Writer and Sports Reporter of the Year among nine national awards.

Stafford has 16 published books varying from official diaries like England Rugby 2003 World Cup Winners and 2005 Ashes Series to the official Formula One Opus.
His best-known books cover playing with the greatest global sports. "Playgrounds of the Gods" became an international best-seller and its three sequels, "In Your Dreams," "In Search of the Tiger" and "Who Do You Think You Are....Michael Schumacher?" followed suit.

Stafford is a sought-after event host and live interviewer of stars. Recent clients include Balfour Beatty, Saga, Canary Wharf Group and M Restaurants. Events include conferences with Sir Clive Woodward and Judy Murray, an evening with Sir Bradley Wiggins. In 2020 he hosted podcasts and streamed TV shows with celebrities for Saga.

In 2017 he launched The Sporting Club, a networking club with permanent venues in London, Manchester and Leeds staging events featuring sporting A-listers.

Saga Magazine Podcast
Interviewer
London, UK
On behalf of Saga magazine, Ian interviews a selection of stars from the worlds of sport and entertainment, ascertaining their interests and ambitions.
View allHide

The Official Formula 1 Opus
Author
Jan 2012
London, UK
The biggest book on Formula One ever produced, The Official Formula One Opus tells the history of the sport in fine detail. Comprising of exclusive interviews and breathtaking imagery, numerous racing legends feature including Lewis Hamilton, Niki Lauda, Michael Schumacher and Ayrton Senna. Sewn and bound by hand in the finest leather, each copy is personally signed by Bernie Ecclestone.

Playgrounds of the Gods: A Year of Sporting Fantasy
Author
Sep 2000
Edinburgh, UK
Ian reflects on the nine injury-affected months during 1998 when he followed his personal sporting dreams and played sport with some of the world's greatest teams and individual sports stars. Shortlisted for William Hill Sports Book of the Year.

In Your Dreams
Author
Aug 2001
London, UK
Writer Ian Stafford details how he fared when he took on professional athletes at their own game and the crucial qualities that make them so successful in their respective sports. In this engaging title, Ian partakes in a pre-season tour with Everton, plays cricket for Yorkshire, wrestles Pat Roach and takes the rugby field for Wigan, amongst other fascinating experiences.

In Search of the Tiger
Author
Jun 2003
London, UK
Ian shares the development of his golfing prowess (and disappointments) while exploring his desire to play a round with Tiger Woods.

Who Do You Think You Are... Michael Schumacher?
Author
Feb 2006
London, UK
Littered with a plethora of greats from the driving world including Niki Lauda, Jenson Button and Stirling Moss, Ian sets out to prove his driving prowess in this endlessly entertaining tale. Tackling the sophistication of Monaco, the deadly cold of Schumacher's hometown, Stafford seriously ponders his chances against the racing legend after a crash on a suburban school run in the US.

Lewis Hamilton: New Kid on the Grid
Author
Nov 2007
Edinburgh, UK
Ian's record of how Lewis Hamilton raced his way to the top of the world drivers' championship in the space of six races and from rookie driver to favourite of many grand prix fans.

Ashes Fever: How England Won the Greatest Ever Test Series
Author
Sep 2005
Edinburgh, UK
Ian captures the drama of the 2005 Ashes Series when England produced their best performances over three months to dethrone the best test cricket team in the world.

World Cup 2003: The Official Account of England's World Cup Triumph
Author
Jan 2004
London, UK
Ian's inside story of the build-up to, progress and triumphant victory for the England Rugby Team in the 2003 World Cup

Born to be King
Author
Sep 1996
London, UK
Ian writes about the rise of boxer Naseem Hamed who came from humble Yorkshire beginnings and became a superstar of the ring.

Easy Ryder
Author
Oct 2006
London, UK
Ian retells the remarkable story of Europe's three consecutive Ryder Cup victories, an achievement many believed to be impossible. Held at The K Club in County Kildare, the 36th Ryder Cup was dominated by Europe from beginning to end. Featuring numerous eye catching photographs, Easy Ryder is a celebration of one of golf's biggest events.

Steve Backley: The Winning Mind: A Guide to Achieving Success and Overcoming Failure
Co-Author
Apr 2000
London, UK
Ian collaborates with former British track and field athlete Steve Backley to determine how to achieve success in both the sporting and business world. The title covers a range of key areas including team work, motivation, goal setting, competition and positive/negative arousal.

Toughing It Out: The Adventures Of A Polar Explorer And Mountaineer
Author
Nov 1997
London, UK
Ian tells the incredible story of David Hempleman-Adams, an astounding individual who has walked to the South Pole and scaled the highest mountain of every continent in the world. Stafford explores his finest achievements, as well as his near misses in what is a captivating read.

World Cup 2007: The Official Account of England's World Cup Campaign
Author
Nov 2007
London, UK
Pitting their wits against some of the finest teams in world rugby, England made it to the 2007 World Cup Final in remarkable fashion. Having to overcome retirements and injury issues, Ian details the campaign from start to finish, one of sport's most unlikely turnarounds that saw the side return to prominence and compete with the elite once more.
View allHide

The Press Awards
Highly Commended
London, UK
Established in 1962 and formerly known as the British Press Awards, The Press Awards is an annual ceremony that celebrates the best of British journalism.

British Sports Journalism Awards
Sports Interviewer of the Year
London, UK
First awarded in 1976 and widely regarded as the Oscars of sports journalism, The British Sports Journalism awards recognises the elite within the industry, rewarding much deserved contributions to writing, photography and broadcasting. The ceremony is held annually at a gala dinner in London.

Dallaglio RugbyWorks
Supporter
London, UK
Formed after legendary rugby player Lawrence Dallaglio lost his mother to cancer in 2009, Dallaglio RugbyWorks aims to engage people through the sport of rugby. Hundreds of individuals on the verge of exclusion from mainstream education have benefitted, with a chance to succeed provided and the potential to progress onto further training and education.

NSPCC
Supporter
London, UK
Working to combat child abuse, the NSPCC is an independent charity that has remained committed to such a crucial cause for over 100 years and in doing so, proudly leads the way as the UK's top such organisation. 90% of its funding originates from supporters and every single penny donated allows the charity to reach as many children in need as possible.

British Heart Foundation
Supporter
London, UK
Established by a group of medical professionals in 1961, The British Heart Foundation help fund extra research into the causes, diagnosis, treatment, and prevention of heart and circulatory diseases. Relying predominantly on voluntary donations, the organisation currently funds over 1000 research projects and aims to spend in the region of £100 million in funding UK scientists each year.

WellChild
Supporter
Cheltenham, UK
Originally established in 1977 as Kidney, WellChild is a national UK children's charity which aims to allow children and young people experiencing exceptional health issues, to be treated at home instead of hospital.

SportsAid
Supporter
London, UK
SportsAid is a UK charity that assists the next generaton of British athletes when parents are their only means of support. The organisation provides crucial funding to help with costs of training and competing. Typically, more than 1,500 athletes receive SportsAid awards of £1,000 every year.

Children's Air Ambulance
Supporter
Rugby, UK
Formed in 2005, Children's Air Ambulance is a charity that transfers critically ill children from local hospitals to specialist paediatric centres throughout Great Britain. The service also transports patients and equipment. More than 400 missions have been conducted since its inception.

Laureus
Supporter
London, UK
The Laureus World Sports Academy is a group of sporting legends. Under the stewardship of Sean Fitzpatrick, members come together on an annual basis to vote for the winners of the Laureus Sports awards, the most prestigious in global sport. Academy members regularly participate in Sport for Good initiatives, aiming to inspire young people through playing sport.

Ruth Strauss Foundation
Supporter
London, UK
Established in memory of Sir Andrew's late wife, the Ruth Strauss Foundation aims to provide psychological, emotional and wellbeing support to patients and their families. The organisation also funds research into rare lung cancers. The idea for the charity's formation came from Ruth in the last few months of her life.

Teenage Cancer Trust
Supporter
London, UK
Founded in 1990, Teenage Cancer Trust supports individuals between the ages of 13-24 who are suffering with the disease. The charity provides specialist teenage units in NHS hospitals and to date, has established 28 in cities throughout the UK. The trust also trains and funds teenage cancer specialists.

Matt Hampson Foundation
Supporter
Melton Mowbray, UK
Paralysed from the neck down after an accident in an England Under 21 rugby training session in 2005, Matt made it his goal to establish the foundation to support those who have suffered similar catastrophic injuries. The foundation provides support, advice, relief/treatment for anyone suffering serious injury or disability, particularly those harmed participating in sport.
View allHide